Besides the grueling schedule necessitated by the need to make payroll (or at least the desire to make as much money as possible), Negro Leagues travel was often complicated by the difficulty of finding places to eat and sleep, especially (but certainly not only) in the South. As manager, and frequently the bus driver, of the Pittsburgh Crawfords, Toledo/Indianapolis Crawfords, Philadelphia Stars, and Indianapolis Clowns, Oscar Charleston likely would have made use of the Green Book, which began publication in 1936, in his travels. The book listed restaurants, hotels, tourist homes, service stations, and other places of business where Black travelers could be sure to be served.

Here is the Mississippi page from the 1947 edition. it appears that the state had seven hotels that served Blacks. Private homes took up some of the slack. 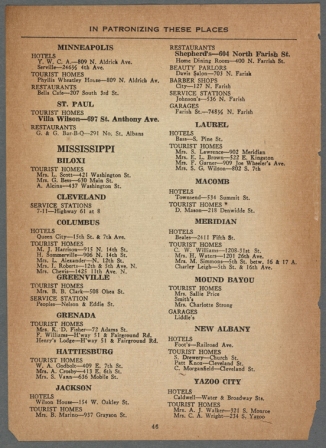