Over the last two days, while doing research in the Pittsburgh Courier files of the mid-1920s, I came across two wonderful nuggets. Each helps to reveal something about the personality and habits of Oscar Charleston, and about how others viewed him. This was during the peak of his career, while he was playing, managing, and essentially acting as the general manager of the Harrisburg Giants. 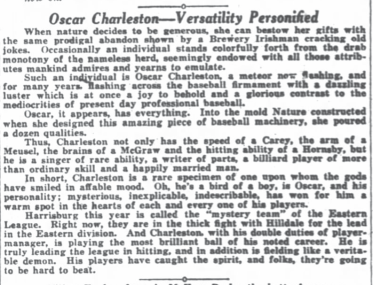 So: Oscar could sing! And take your money at billiards! And seemed, at least, to be happily married and well-liked by those who knew him, even as he remained somewhat hard to get to know.

Second, an April 3, 1926, anti-liquor article in the Courier that uses Oscar as its main example of how avoiding drink leads to success:

One of the outstanding characters of the diamond who shuns liquor is that great and colorful king of the diamond, Oscar Charleston, fielder supreme, the peer of whom is yet to be located. Year after year Oscar has gone on piling up achievements which make him a place in the hall of fame of Negro baseball for all time, aiding the game by his clean and sane method of living and playing the game. The answer is plain. Oscar could not have maintained such a remarkable record of performance if he had been a drinker, and this, we think, is one of the greatest factors of his success.

Dizzy Dismukes, too, we are told, also is a non-drinker. By contrast, the author argues, alcoholism drove former Charleston teammates Specs Clark and Jimmy Lyons out of baseball.

Dismukes and Charleston seem to have been friends. Charleston’s photo album contains a number of photos of his wife Jane with Dizzy’s wife in Cuba. Teetotaling may have been one thing that bonded the two men.