Greetings, and apologies for the hiatus here. Everything, I am pleased to report, is proceeding apace with the Charleston bio, which, if I have not announced it before, is to be published by the University of Nebraska Press in 2019. I am on track to deliver the manuscript next spring, God willing, and had two occasions to present on Oscar this summer: first at the Midwestern History Association meeting in Grand Rapids, and next at the Jerry Malloy Negro League Conference in Harrisburg.

Thanks to the offices of city historian Calobe Jackson Jr., the trip to Harrisburg provided me the delightful opportunity to meet Mrs. Elizabeth Overton, Jane Charleston’s great-niece. Mrs. Overton was extremely close to Janie, living with her for many years and caring for her at the end of her life. She is also the family historian, so Janie entrusted her with numerous documents, photos, and stories about the Blalock family. Not, alas, with all that many stories about Oscar–but some.

My interviews with Mrs. Overton and her daughter, Dr. Miriam Phields, have given me a much better handle on who Janie was, what she was like, what she believed, and how she lived. All utterly invaluable, of course. I am deeply in the debt of Mrs. Overton and Dr. Phields, and will doubtless be leaning on them more as this project advances. (They have been warned.)

Anyway, I took a lot of photos of photos while visiting Mrs. Overton, and I think this charmer may be my favorite. 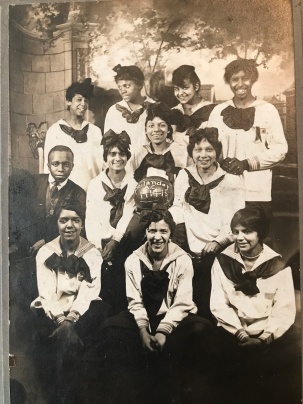 Click on the photo, and you can see the basketball reads “Philander A.C., 11-14-15.” That’s Janie in the second row, second from the left, sitting next to this cheerful basketball team’s male coach (I assume that’s who he is). And in the front row, sitting in the middle, is Esther Popel, a good friend of Janie and her sisters. Who was Esther Popel? A Harrisburg girl and Dickinson College graduate who as Esther Popel Shaw went on to become a significant poet and author associated with the Harlem Renaissance.

That was the sort of impressive crowd Janie ran with. Oscar surely took pride in that. Maybe he even read Esther’s poetry, sometimes.