That was the official start of Charleston’s professional baseball career. But the 24th actually began to play Manila League teams several weeks earlier, as part of the city’s Carnival celebration. Their first game against a Manila League team came on February 8. Here is the story from the next day’s Manila Times.

Neither Rogan nor Charleston had a hit, but Rogan did strike out ten batters. Not a bad way to announce yourself. (By the way, the paper routinely referred to the All-Filipinos team as the “Brownies”–referring to their skin color, of course.)

Charleston–who was only seventeen and a half years old at the time–started slow at the plate, but he did go Rogan one better on the mound a few weeks later, after official league play had begun. I think the following game of March 15, 1914, may have been his first professional appearance as a pitcher (but I’m not sure about that). If so, how many pitchers can say they struck out four men in the first inning of their first game? 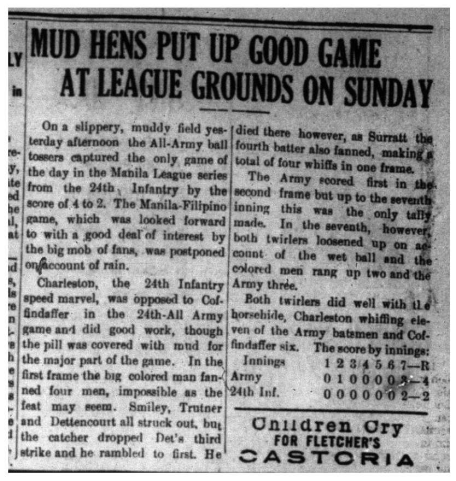