The Wall Street Journal runs the photo below, not often seen, of our man Oscar in last Saturday’s issue. The photo, taken by Pittsburgh photographer Teenie Harris, depicts Oscar standing in a dark suit outside Gus Greenlee’s Crawford Grill. It comes from the Harris Archive at the Carnegie Museum of Art, and if all goes well will also be included in my Charleston bio. 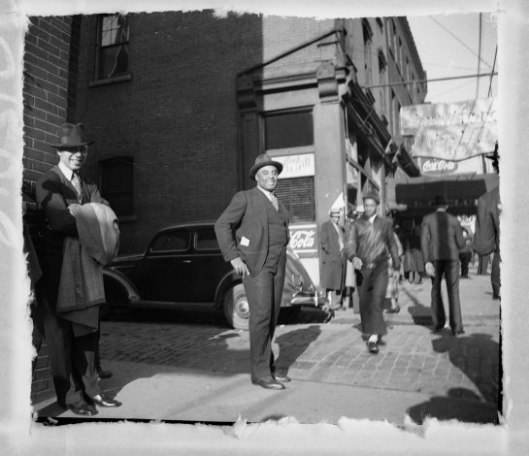 The Journal runs the photo along with a review (which doesn’t mention Charleston), by Gerald Early, of Mark Whitaker’s new book Smoketown, which tells the story of the mostly unknown black cultural renaissance that took place in Pittsburgh in the first half of the twentieth century. Pittsburgh Crawfords owner Gus Greenlee and Homestead Grays owner Cumberland Posey figure largely in Whitaker’s account, and rightly so. Josh Gibson and Satchel Paige also get a lot of coverage.

Charleston is mentioned a number of times, but I think Whitaker doesn’t quite do him justice with respect to how close he was to the center of this renaissance–certainly more than any other black baseball player was at least until the mid-1930s. That is understandable, given Charleston’s neglect in the secondary literature. At any rate, Whitaker’s book is a wonderful read, and he clearly understands the Negro Leagues’ cultural importance as a symbol of black achievement as well as anyone.