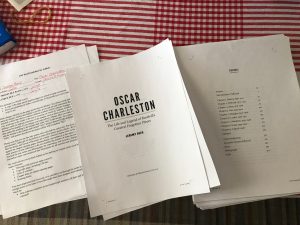 Let’s all just agree that no errors will remain, OK?

Most of my changes had to do with updating Oscar’s statistics. There have been some changes to the Seamheads.com database lately. Instead of owning four of the top five seasons by OPS+ in Negro Leagues history, Oscar now only owns four of the top eight.

He is trending in the wrong direction!

But four of the top eight is still pretty good.