I had intended to include in Oscar Charleston: The Life and Legend of Baseball’s Greatest Forgotten Player a chronology of Charleston’s life. I thought it would be particularly helpful in Oscar’s case, given how peripatetic he was, and given the errors floating around in the online ether. But including it would just make the darn book too long, said the University of Nebraska Press, no doubt wisely. So I have now included that chronology here. You can navigate to it using the top menu of the site.

As always, if you spy any errors or have any questions, please let me know.

Just came across this testimony on Oscar Charleston’s abilities from Honus Wagner, as quoted (or remembered by) Wendell Smith, crusading sportswriter for the Pittsburgh Courier.

The quote from Wagner is wonderful. But more wonderful is the direct, contemporary quote from Oscar about not getting the chance to play in the majors. This is the only place I have seen where he addresses the issue personally and directly. 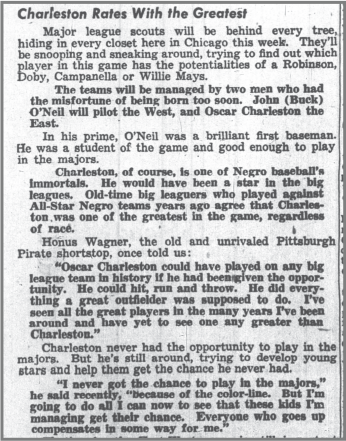 I believe Oscar played against Wagner’s “All-Stars” in an exhibition game in 1929 or 1930, when Oscar was with the Homestead Grays. Wagner was, of course, long retired by then. But presumably he knew an elite ballplayer when he saw one. And he may well have seen or played against Charleston before then, although I have not come across such a game.

Within four months after Smith published this column, Charleston was dead. Wagner died the next year, in December 1955.

Oscar Charleston’s one year managing the Indianapolis Clowns–the final year of his baseball career and, indeed, his life–was made particularly remarkable by the team’s inclusion of two women: Connie Morgan and Mamie Johnson. These were the second and third women to play for the Clowns, actually, following the lead of Toni Stone the year before.

Prior to the Clowns’ 1954 season, owner Syd Pollock hired Charleston to replace Buster Haywood as his manager. Haywood had left to manage the Memphis Red Sox. Alan Pollock implies in his history of the Clowns, Barnstorming to Heaven, that part of the reason for Haywood’s departure was Syd’s decision to bring in female players. 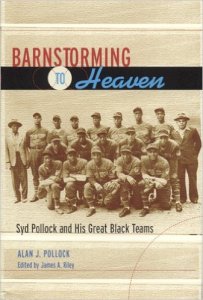 Charleston, writes Alan, was to Syd “the greatest baseball player who ever lived.” By 1954, Charleston had been retired for a year from managing the Philadelphia Stars. Perhaps his health was already slipping. In any case, when he was hired by Pollock in early 1954, he was living in Philadelphia near Connie Morgan, the Clowns’ new second baseman.

Charleston immediately took Morgan under his wing. She recalled:

Oscar Charleston was my mentor. Once the Clowns hired me and hired him, he took me off-season and taught me all he could about sliding and running the bases and, when it warmed a touch, hitting and fielding. He was a strict manager, not so you couldn’t have fun, but stern enough so you knew to get down to business. He had us self-disciplined. Didn’t talk much about the old days. He was interested in winning here and now.”

The other Clowns’ woman player was Mamie Johnson, a pitcher. She said, “with Oscar Charleston, you either played ball or you went home.

The Clowns played ball; in 1954, they won the league championship. In retrospect, it was a fitting close to Charleston’s career.